Given the sudden interest in Utah as a potential *gasp* swing state in the 2016 presidential election, I thought it might be interesting to take a look at what made this happen.

At first it might be surprising that Donald Trump would be struggling in what is usually the deepest red of the red states. Even so, the signs were there as early as March that there might be a problem for him here. Trump did very poorly in the Utah Republican caucuses, coming in a very distant third behind Ted Cruz and John Kasich. He garnered a paltry 12% of the vote and was soundly trounced by Cruz, who beat him by a margin of 55% in one of the few speed bumps he encountered as he steamrolled his way to the Republican nomination.  Furthermore, head-to-head polls between Clinton and Trump in the Spring showed them essentially tied in the state, with a lot of undecideds.

Clearly, Utah Republicans would have preferred someone else to be their party's nominee.  Even so, party identification usually prevails and polls conducted in June through September showed Trump opening up a substantial lead over Clinton.

Utah, it seemed, was going to have its usual red color on the electoral map.

Even so, there were signs of weakness. Libertarian Gary Johnson was doing unusually well in the polls, regularly drawing support in the double digits. Given that the Libertarian candidate usually gets around 1% of the vote or less in Presidential elections in Utah, this was a sign that there was a certain degree of wariness among Utah Republicans about their nominee.  This was further demonstrated by the fact that the enigmatic "Other" often polled even better than Johnson did when it was offered as an alternative in surveys.  Clearly, it seemed, many Utah voters didn't know who they wanted, they just knew they didn't want Trump or Clinton.

He was a Utah native. Brigham Young University graduate. Conservative.
And, unlike the Republican nominee, someone with actual government experience.

He announced his candidacy on August 8th and seemed to be just what many Utah Republicans would have preferred. The first poll conducted in the state just a couple weeks after his announcement had him at 9% support. Not too bad for a candidate with no real campaign, but McMullin, it seemed, would be an interesting footnote to the 2016 election.

But when the infamous Access Hollywood tape became public, McMullin appeared to become a safe harbor for many disaffected Utah Republicans.

I decided to take a dive into the polls that have been conducted in Utah to see if I could surmise the basis of McMullin's support. He'd publicly stated that his main strategy was not to win an Electoral College majority; that clearly wasn't going to be possible. He couldn't get on the ballot in enough states for that to even be a possibility. Instead, he put forward a plan that he would try to win enough states to prevent either Trump or Clinton from getting to the necessary 270 Electoral Votes, which would trigger the 12th Amendment's provisions to force the election into the House of Representatives in January.

It was a pretty far-fetched plan. It would only work if he could draw support from both Clinton and Trump enough to be able to deny states to both of them. Just on its face that didn't seem likely.

And we have a 20th century French sociologist named Maurice Duverger to thank.

Well, OK... it's not really Duverger's doing, but rather the Political Science "law" named after him. Duverger's Law is phenomenon with which you're likely familiar, but never knew it had a name.

Duverger argued that in winner-take-all electoral systems like we have in the United States, third parties don't usually survive because there's a strong incentive to vote for the "lesser of two evils" from the two major parties. As long as the threat of the "worse evil" winning remains strong, a minor party will struggle.

By September, to most observers, Clinton seemed likely to win but it wasn't necessarily a sure thing. Then The Tape came out and seemed to remove all doubt.

And just like that, the incentive to prevent the "worse evil" from winning appeared to evaporate.

The  Y² Analytics poll was the first to come out after The Tape was released and it showed a virtual three-way tie between Trump, Clinton, and McMullin in Utah. He became a viral phenomenon and it was the first indication that McMullin might be much more than just an interesting footnote to the 2016 election.

Many Utahns were jumping on the McMullin bandwagon.  The only real question was where were they jumping from.

I examined all of the polls taken in Utah from the past three months and modeled McMullin's support as a function of support for Trump, Clinton, Johnson, "Other," and undecideds.  The result showed a pretty clear pattern and confirmed my suspicions: McMullin's 12th Amendment Strategy wasn't going to work. He might be able to prevent Trump from winning Utah's six Electoral Votes, but the chances that Trump was going to get to 270 were already pretty slim.  And the chances he'd block Clinton from getting to 270 were even slimmer.

The figure below shows why.  It shows the estimates of where McMullin's support is coming from based on my analysis.  Simply put, he hurts Trump a lot more than he hurts Clinton. If anything, he's going to make it easier for Clinton to get to 270, not more difficult. 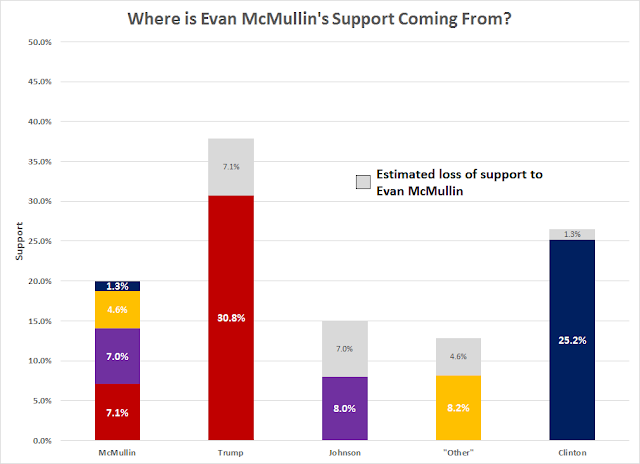 Keeping with the dynamics of Duverger's Law, Clinton supporters have very little incentive to defect to McMullin. So the likelihood that he'll keep her from getting to 270 Electoral Votes is pretty low.  If he's pulling votes from her, he's pulling a lot more votes from Trump.

McMullin’s rise in the polls has primarily come from three places: Those who had chosen the “Other” option in previous polls, but mostly and almost equally from both Johnson and Trump.  Both the Republican and Libertarian candidates have seen a substantial decline in support when McMullin was added to the survey. But most importantly, Hillary Clinton’s already low level of support in Utah barely moved.

So things look pretty good for Evan McMullin in Utah, but there's very little reason to believe that his support will extend too far outside the state. It's an interesting phenomenon here in Utah, but it's not clear that he'll have much of an impact elsewhere In what limited polling that has been done in other states, McMullin is barely registering, failing to get above 1%. He's on the ballot in 11 states, six of them traditionally red: Arkansas, Idaho, Kentucky, Louisiana, South Carolina, and Utah. Of those states, South Carolina is the only one where Trump's average lead in the polls is less than 7%.

But South Carolina is a state that Trump won rather handily during the Republican primaries, so the dynamics there don't quite match those of Utah.  Of the remaining states where McMullin is on the ballot (Colorado, Iowa, Minnesota, New Mexico, and Virginia) Clinton is expected to win, with the possible exception of Iowa.  There, Trump holds a small lead in the polls, and it was a state that Trump lost narrowly to Ted Cruz.  Whether or not that will be enough to tilt the outcome there.

It still remains to be seen whether or not McMullin will win in Utah. Duverger would suggest that he won't and the forecast model that Tom Holbrook and I have developed still says it is highly likely that Trump will take Utah despite McMullin's rise.

More than anything else, it seems pretty clear that McMullin won't be a spoiler. He's not going to deny Trump the Presidency. He's not the cause of the split in the Republican Party, he's a symptom of it, just as Trump's nomination itself is. So, in the end, as fascinating as this has been, McMullin's wild ride with Maurice Duverger may very well end up just being an interesting footnote after all.