Think This Month Has Been A Rollercoaster? Think Again.

If you've been keeping up with the news of the campaign this month, you probably feel like you've riding a roller coaster with all its twists and turns and ups and downs.

Each day there's been some new revelation about one or the other's campaign: Trump made another troubling remark; another Wikileaks dump of embarrassing Clinton campaign emails; another accuser comes forward alleging Trump groped/kissed/said a rude thing to her; another new poll showing the race is running neck-and-neck.

The undulations in this thrill ride we call a presidential election campaign have seemed to be relentless.  And now we have the latest stomach-flipping corkscrew in the track: The FBI has new evidence related to Hillary Clinton's email investigation that it's looking into.

There's a dramatic Breaking News alert every time one of these "bombshells" drop, and it's treated by the news media as if it is the game-changer that will potentially change the race, and fundamentally alter the course of U.S. history.

Except when it doesn't.

You see, voters don't really make sudden, roller coaster moves during a campaign, even when you would think otherwise, especially this late in a campaign.  The reason for this is pretty simple, and has some pretty deep roots in a psychological phenomenon known as cognitive dissonance.

About 60 years ago, a psychologist named Leon Festinger discussed what happens when humans encounter information that conflicts with something they already believe. It creates an uncomfortable state he referred to as cognitive dissonance. Since it is uncomfortable, people naturally try to minimize the importance of that information.  They'll ignore it, or try to rationalize it away.

On the other hand, when information reinforces what people already believe, there's no dissonance. Quite the contrary: they are all too willing to accept it because it makes them feel more justified in holding their views. It's not uncomfortable; it's like curling up with a cozy blanket.

Commentators on TV news programs like to use the term "baked in" a lot to talk about voters' attitudes about certain considerations, like their impressions of a candidate's qualifications, temperament, or honesty.  It's an overused term, but it does get to the heart of what I'm discussing here.

In Political Science there has been a long-standing proposition that campaigns actually have a minimal effect on the outcome of elections.  It's undergone some slight revision in the past couple of decades, but the simple point remains: By this point of the campaign the vast majority of voters have already made up their mind, and when events happen they usually hit the wall of people's pre-existing perceptions.

People will view campaign events through their own psychological filters.  If the events reinforce their predispositions, they will hold them up as highly relevant. If they create dissonance, they will be discounted as irrelevant.

So, what does that tell us about how the events of the past several weeks will affect the election on November 8th?  What it suggests is that "October surprises" often do very little to shift voter intentions.  As a case in point, take a look at the figure below. It presents the movement of the polls so far this month along with the "Breaking News" events we've seen so far. 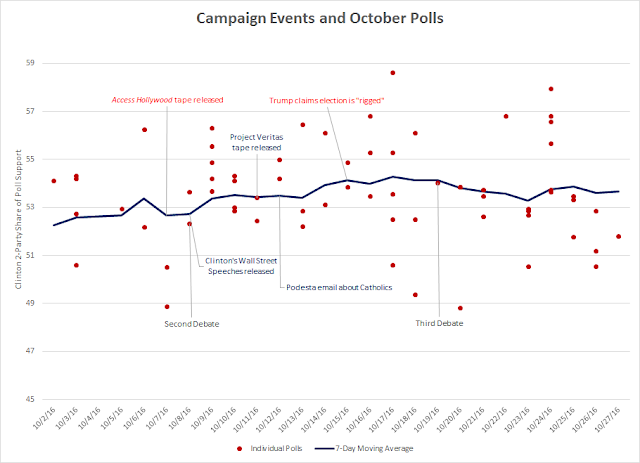 You'll notice that the individual polls (the red dots) show a great deal of variability.  That's normal. Each individual poll is likely to have some error to it. That's to be expected, because each one represents a small subset of the population, and it is reasonable to expect it to have some error.  That's why we talk about a "margin of error." It's an acknowledgement that it's just a sample and could be wrong.  Even if a poll is conducted perfectly, it's likely to have some unintended bias in its sample.

That's why any savvy consumer of poll data will tell you that instead of focusing on any single poll, you should take a look at the average of polls.  Some polls will have error overstating one candidate's level of support, while others will have error overstating his/her opponents level of support. Sampling bias happens. It's not necessarily a nefarious attempt at generating a phony result.  It is just a simple by-product of not talking to everyone, because no one has time for that. But, generally speaking, that bias is going to be random.

That's why I've added the moving average line to the chart. It shows the ebb and flow of public opinion while smoothing out the random sampling errors of each of the individual polls.  The most important thing to notice is how little movement it shows.  Yes, it has moved and it has moved in somewhat predictable fashion.  It is possible to discern that there may have been an uptick of support for Clinton following the Access Hollywood tape coming out, but what's more telling is that it was pretty small. Only 2 points separate the peak (the week following the Access Hollywood tape) from the valley (the week right before the Access Hollywood tape).  For the most part, however, the polls have hovered within that range.

This is pretty consistent with research that has been done on the subject.  My forecasting partner, Tom Holbrook at the University of Wisconsin-Milwaukee, published a book a number of years ago entitled Do Campaigns Matter? and his conclusion was remarkably similar to what I've shown you here: That events in the course of a Fall campaign can move the polls somewhat in predictable fashion, but generally only do so a couple points, and often they move in opposite directions and cancel each other out.

It's this basic fact that makes it possible for an election forecast model like ours to generate fairly accurate predictions of the outcome a month in advance of the election.  By the end of September, most people already know how they're going to vote so they've already got their cognitive defenses built up.  So whatever comes in October often is blunted by their perceptual screens.

So, yes, the polls do move in response to "Breaking News" events, but not to degree that you would think, especially given the attention they are given on the cable news programs.  That's because, at this point in a campaign, the die is pretty much cast for the vast majority of voters.