The first indication that 2018 will be a good year for Democrats is the well-documented phenomenon of midterm loss. Since 1946, the president's party loses an average of 25.6 seats in the House of Representatives in midterm elections. To regain control of the House, the Democrats need to pick up 24. 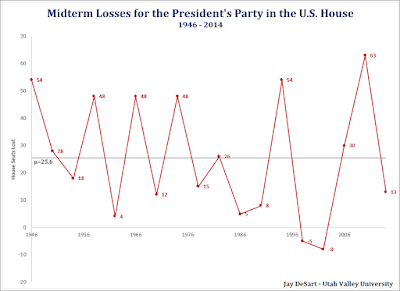 That doesn't leave a lot of room for error, and you'll see that there's quite a bit of variability in the magnitude of midterm losses over time. There are a number of years where the president's party lost significantly fewer than that average number. Indeed, in two years (1998 and 2002) the president's party actually gained seats. So there's certainly no guarantee from this that the Democrats would be able to win enough seats to regain majority control in the House.

The real question is whether there is some predictability to this variation that might give us some indication as to whether 2018 will be at the high end or low end of this distribution.  As it turns out, this variability is not random and it is possible to identify some of the factors that can foretell what kind of context a given midterm election year will bring.

One of these factors is whether the president faces unified or divided party control. Nearly 30 years ago, political scientist Gary Jacobson, one of the world's leading scholars on congressional elections, forwarded the argument that it is much easier for the party opposing the president to make gains in midterm elections when they are in the minority.  The argument is very simple: It's easier to point the finger of blame when someone else is clearly in charge. There is a lot of voter discontent and dissatisfaction with the way things are going in Washington. This is likely even more the case now than it was when Jacobson published his work. Given that, it is easier for the "out-party" to focus that discontent on the party in power when they hold all the keys, just as the Republicans do now. Whether or not it is fair to blame all the problems of government and society on the party in power is beside the point. What matters is that it appears to be an effective argument to make.

Indeed, there is strong empirical evidence to substantiate this claim. When presidents enjoy unified party control of Congress, on average they lose over twice as many seats in midterm elections than presidents facing divided party control (34.9 to 16.3). 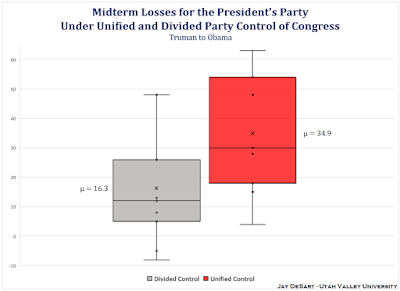 The top three midterm losses for presidents since 1946 came in years when one party controlled both the White House and both houses of Congress (1946, 1994, and 2010). Again, while that is not good news for the Republican Party in 2018, there remains a good deal of variability in outcomes.  In 1962, a midterm election year in which Kennedy enjoyed unified control, the Democrats only lost 4 seats, and in 1978 Carter and the Democrats similarly only lost 15 seats. Both of those numbers are well shy of the gains Democrats would have to make in 2018 in order to regain control of the House.

Clearly, unified party control is not the only factor in explaining the magnitude of the losses for the president's party in midterm elections. There is another even more important factor that can explain what happens at midterm: presidential approval.

The correlation between presidential approval and congressional election outcomes has been fairly well documented over the years. The effect is fairly straightforward as well: Midterm elections are, in part, referendums on the sitting president. So the more popular the president is, the smaller his midterm losses will be. Indeed, the two years in which the president's party actually GAINED seats, 1998 and 2002, Presidents Clinton and Bush both had approval ratings at or above 65%.  In 1962, when the Democrats lost only 4 seats, Kennedy had 68% approval. 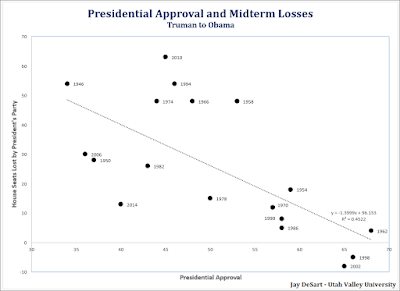 Even in the special elections we've seen so far in 2017, that pattern seems to hold up.  While it is true that Republicans have won every one of them, it has been pretty well documented that the Democratic candidates have outperformed their vote shares in those districts compared to previous elections.  When one considers that President Trump has approval that is hovering in the high 30s, it isn't a large leap in logic to suggest that these results seem to confirm the approval + midterm loss link. In a broader range of races where more competitive districts are part of the picture the impact would likely become more apparent in the aggregate.

So, that leaves us with two questions: 1) How do presidential approval and unified party control combine in explaining the variation in midterm loss, and 2) What will President Trump's approval rating be on Election Day 2018? 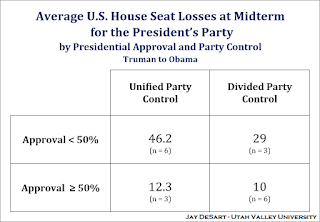 On the other hand, when the President's approval rating is above 50%, the losses for his party are comparatively small, even in years when they have unified party control. Those losses tend to be much smaller than what the Democrats will need in order to win a majority in 2018. So, that brings us to the second question: What will President Trump's approval be on November 6, 2018?

Historically, presidents experience an average decline in their approval rating of about 10% between their inauguration and midterm election day. The change from inauguration to midterm ranges from big declines of 31 for Truman and 22 for LBJ and Obama to increases of 7 and 8 points for both first and second Bushes, respectively. 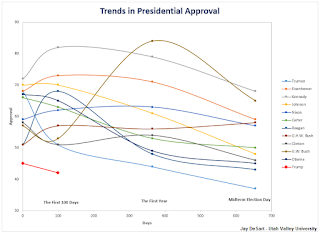 Again, that's a pretty big range and it is pretty difficult to project forward because there are so many factors that can potentially influence a president's standing with the public. Approval often tracks along with economic conditions, as the economy improves the presidents approval rating does as well. We don't typically see big swings in the short term as a result of the economy however.  Instead, the big swings are typically the result of some significant crisis.

Both Bushes enjoyed record levels of approval, largely as a result of a significant rally-event. The Iraqi invasion of Kuwait boosted George H.W. Bush's approval in advance of the 1990 midterm. Bush later saw his approval rating jump another 31 points in the months following the election when the U.S. invaded Iraq at the beginning of the Gulf War. George W. Bush saw an immediate 39% jump in his approval rating as a result of the September 11th attacks, the effects of which had begun to fade but were still being felt a year later at the time of the 2002 midterm elections.

Since it is impossible to tell if a major international event will occur between now and November 6, 2018, it is difficult to say with any certainty what President Trump's approval rating will be at that point.  Barring an event like that, it is reasonable to expect that his approval will follow the same trend line as every other president. Indeed, we've already seen his approval matching the downward trend that other presidents have experienced.  Gallup's first approval figure for President Trump following his inauguration was the lowest of any president since Truman at 45%. At this point five months into his presidency, his approval rating is hovering around 38%, about 7 points lower.  Where it goes from this point is anyone's guess.

But if we assume that his approval rebounds to at least his starting level, 45%, what does that mean for the expected losses for the Republicans in 2018?  If we look at the combined effects of approval and unified party control, the news is not good for the GOP. 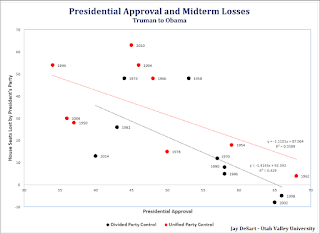 The data suggest that the lower a president's approval rating is the worse his party will perform at midterm, and that his party will perform even worse when they face a situation of unified party control. 50% really appears to be the critical point.  No president with less than a 50% approval rating has experienced party losses in the midterm election fewer than 28 seats.

For a president with an approval rating of 45% and unified party control at midterm, the pattern in the data suggests that the typical loss would be about 37 seats, more than enough for the Democrats to regain majority control of the House.

Again, nobody really knows what President Trump's approval rating will be next November, and even if we did, there's still a good deal of variation in the size of the midterm loss that isn't explained by this data.  It's entirely possible that Trump's approval could rise significantly in the next 16 months, and even if it didn't it's also possible that the GOP could outperform the typical pattern.

But that requires a lot of things to happen that just don't seem terribly likely.

One thing seems fairly certain: whatever happens I'll be there looking at the numbers, because that's what a nerd does.
Posted by Jay DeSart at 8:53 PM