In Spite of Alabama, The Democrats Probably Still Won't Win Control of the Senate in 2018

The results of last week's special Senate election in Alabama, along with the strong showing for Democrats in elections nationwide here in the past couple of months, have got Democrats feeling pretty optimistic for their prospects in next year's midterm elections.

In my last post, I showed that there's a strong likelihood that the Democrats will regain control of the House. I showed that a couple key contextual factors (i.e. presidential approval and unified party control) appear to be critical in shaping the outcome of U.S. House elections, and that those contextual factors would seem to suggest that the Democrats have a fairly decent chance of winning enough seats to become the majority party in the House. Obviously, those same contextual factors will be present for next year's Senate races, but given a key difference in the nature of Senate elections, the Democrats' prospects of gaining control of the Senate are much slimmer.

There is most definitely a correlation between the number of House and Senate seats lost by the president's party at midterm.  When it's a good year for a party, it usually translates into being a good year for their electoral fates in both chambers, as the figure below shows. 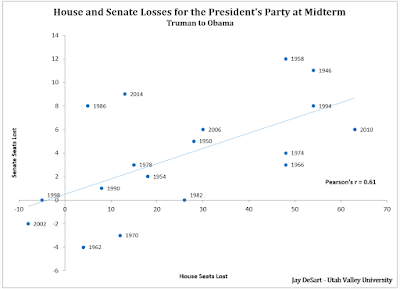 This would seem to suggest that the same forces that affect House races are in play for Senate races as well.  Indeed, just as there is a strong correlation between presidential approval and House seat losses for his party at midterm, there is a similar pattern in midterm loss in the Senate as well. Presidents with lower approval ratings tend to see their party lose more Senate seats at midterm. 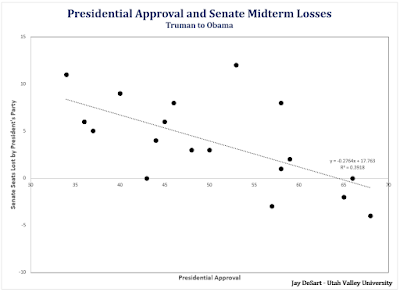 There is, however, a substantial amount of variation in outcomes that presidential approval alone doesn't explain.  For example, presidents with approval ratings within the very narrow range of 43 to 46% have experienced Senate midterm losses anywhere between 0 and 8 seats.  That doesn't really make for a prediction in which one can have much confidence. Clearly there are other factors beyond presidential approval that explain variation in aggregate Senate outcomes.

In my previous post, I showed that whether or not a president faced unified or divided party control helped explain midterm losses for his party in House of Representatives races. The president's party tends to lose, on average, 10 more seats at midterm under unified party control than it does under divided party control.  In Senate elections, that effect does not appear. Clearly, something else is at work here. 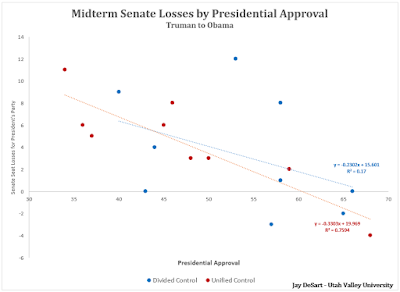 One key difference between House and Senate races that likely explains this is the fact that, unlike House elections, only a third of the Senate comes up for election at a time. That means that the aggregate outcome in Senate elections may largely be a function of which particular seats are up for election in any given year.

What I'm talking about here is the notion of exposure; A party can be more or less exposed to seat loss depending upon how many seats it's actually defending. Simply put: It's easier for a party to lose seats when it has more seats up for election.  This idea is certainly not a new one to Political Science. It's been around for decades.

As the figure below shows, there's a pretty substantial correlation between the number of seats a party is defending in a midterm election and the number of seats they end up losing.  The more they are exposed, the more they lose. So, it's not as straightforward to argue that midterm Senate losses are simply a function of presidential approval. 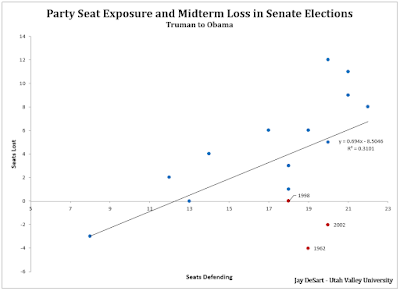 That being said, however, it is interesting to note that the three midterm elections in which the President's party lost significantly fewer seats than one would expect simply based on its level of exposure are those in which presidential approval was the highest (1962, 1998, and 2002). Clearly Senate midterms are a different creature than House midterms, but with one point of similarity: Presidential approval matters.

In terms of presidential approval, as it stands right now, it would appear to be good news for the Democrats, just as it is over on the House side. Presidents who have an approval rating below 50 percent at midterm lose, on average 5.8 seats. Those with approval ratings of 40 percent or lower, where Trump is now, the average losses have been over seven seats.

The key difference between 1970 and 2018, however, is that Nixon enjoyed a 57% approval rating in 1970, which presumably helped the Republicans pick up seats from an already favorable context. At this point, however, it doesn't appear that Donald Trump will enjoy approval ratings quite that high next November.

To piece together these two competing forces I ran a very simple regression model pitting exposure and approval against each other in explaining midterm Senate losses.  These two variables together explain over 62% of the variation we see in the distribution of midterm losses for the president's party in Senate elections since 1946.  The model is as follows:

If we plug in 8 for the level of exposure (this assumes no Republican Senators from seats not up for election in 2018 die or retire), and 37 for approval (President Trump's current average approval rating at both HuffPost Pollster and RealClearPolitics) we get a predicted seat loss of just one seat. With the Republicans currently sitting on a very slim 51-49 majority, that would result in a 50-50 split. But with the Constitution giving Vice President Pence the authority to cast tie-breaking votes in the Senate, for all intents and purposes, that still gives the Republicans a majority.

What makes the battle for control of the Senate particularly challenging for the Democrats in 2018 is that of the 26 seats they are defending next year, 10 of them are in states Trump won last year (Florida, Indiana, Michigan, Missouri, Montana, North Dakota, Ohio, Pennsylvania, West Virginia, and Wisconsin).  Of those 10, Trump won five of them quite comfortably by margins over 18% (Indiana, Missouri, Montana, North Dakota, and West Virginia).

So, in order to gain control of the Senate, the Democrats would not only have to pick up two of the only eight seats the Republicans are defending, but they'll also have to hold on to a number of seats in states that went pretty heavily for Donald Trump in 2016.  Granted, it's easier for them to win two than it was for them to win the three they would have needed prior to Doug Jones' win in the Alabama special election on Tuesday. Even so, two is a pretty significant challenge under the circumstances.

Given all this, it seems pretty likely that the Republicans will retain control in the Senate in spite of what otherwise looks like will be a very strong year for the Democrats.