With just one week remaining until the election, the forecast model that Tom Holbrook and I developed 17 years ago has now given Hillary Clinton a 99.5% probability of winning.

In light of the news of FBI Director Comey's letter to Congress last week, you might think that probability to be a bit high, but the data really do support it.  Simply put: At this late stage of a campaign, most voters minds are made up and there is not much that will move them. In the initial polling data that has come out since the news of Comey's letter broke, there has been very little movement to suggest it will have much impact on the outcome.  That's why our forecast, based primarily on polling data, is highly predictive of the outcome this close to the election.

Making matters worse for Donald Trump is that Hillary Clinton has solid leads in a large number of states... states that he needs in order to win. And that makes Trump's run for the White House an incredibly difficult climb.

Our model generates state-level predictions that we can use to determine the likelihood that a candidate will win the state. It's a simple principle: the larger the lead we project a candidate to win by, the higher the probability that they will actually win it. So, the real question turns to which states Clinton and Trump are most likely to win.

In past elections, we have found that when candidates are projected by our model to win a state by at least 6% they end up winning it... every single time.  That translates into a state win probability of at least 90%. At this point in the campaign, we've never had a candidate lose a state when we've given them at least a 90% chance of winning.  The highest was Indiana in 2008.

In that year, one week before the election our model gave John McCain an 84% chance of winning Indiana. Barack Obama pulled off a surprise victory there on his way to winning the Presidency.

And therein lies the problem for Donald Trump.

If we assume that a candidate will win the states where our model gives him or her a greater than 90% chance of winning, you can then see why the probability that we have for Hillary Clinton winning the election is so high.

Below is the map where we've automatically awarded states to the candidate who has a greater than 90% chance of winning. 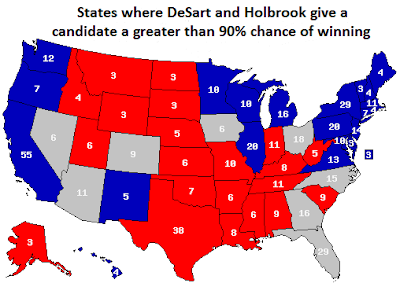 If we allocate the Electoral Votes from theses state to the candidate we expect to win them, the totals are:

Given that a candidate only needs to get to 270 in order to win, Trump's path to 270 is very, very narrow. Simply put, he needs to win all 8 of the remaining states in order to cross the finish line first. That is a monumental task indeed, especially given the fact that our model is currently projecting Clinton to win 6 of them.

She only needs one.

Of the gray states on this map, the one with the highest win probability is Colorado. Our model gives Hillary Clinton an 87.4% chance of winning the state. If Clinton wins Colorado as our model projects, she wins and Donald Trump loses.

If she wins any of the other states, she wins and Donald Trump loses.

According to our model, Donald Trump has one path to victory, and it just barely gets him across the line. Hillary Clinton has many paths.

It's simple math, and that's why Donald Trump's climb to the White House is the equivalent of climbing Mount Everest, and that is why we're giving him a less than 1% chance of succeeding.
Posted by Jay DeSart at 8:15 PM